It was a hot bank holiday weekend. 4 million people were reported to be on the roads. Most of them seemed to be ahead of us, complained my husband as we drove down to the New Place Hotel near Southampton.

Entering the wrought iron gates, we could see the Grade I listed manor house ahead. That turned out to be where the hotel’s bar and restaurant are housed. The hotel’s mews bedrooms are actually situated within the 32 acres of landscaped gardens. So is the leisure centre, where I headed for a swim and sauna as soon as we had booked in.

And why had we made this excursion?

We were joining friends at Vanessa’s second Wedding……

……..or should I say we were being transported back in time to 1945 to attend a Murder Mystery Dinner by Murder 57.

The murder mystery itself takes place in one of the hotels function rooms, not the manor house, but you do get to eat breakfast there.

You also get to experience the leisure facilities, such as the swimming pool and to take a walk around the hotel’s woodland trail. You can even have a go at playing croquet.

Vanessa Tobin lost her husband Gary during the war, but now she has found love with the dashing hero Captain Sam Hill.

Once all our team had arrived and booked into our rooms, we headed for the wedding reception. Chatting over drinks in the bar area, we were greeted by Vanessa and her new man as well as the vicar, bridesmaids and other prominent guests.

However, it soon became apparent that not everyone approved of the match.

And, as we were lead in to dinner, we discovered that not all the wedding party were as innocent as they at first appeared……. 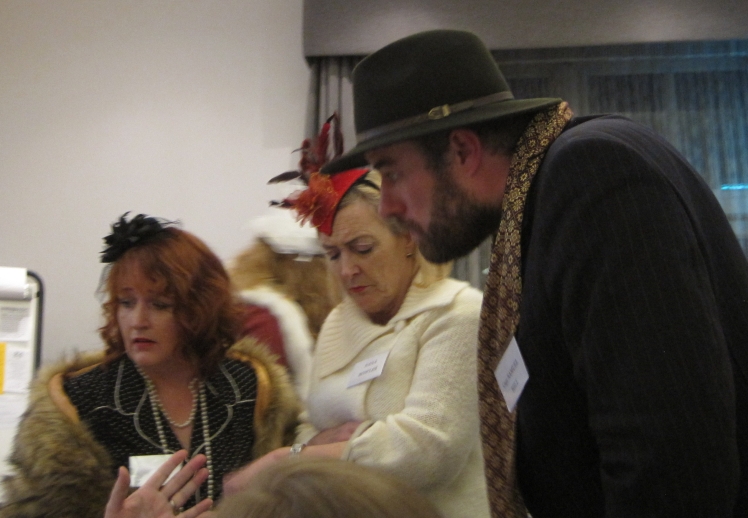 Questioning the cast at Murder 57

Did we deduce whodunit?

Well, spoiler alert, there were two murders in the end and yes we worked out the right murderer in both cases.

Unfortunately we were unsuccessful in deducing the correct motive for the second murder, so we missed out on the prizes.

A fantastic night with a fantastic table of sleuths. Looking forward to the next one.

3 thoughts on “Marriage Of Vanessa”